You are here: Home / Games / Tabletop & RPGs / True Quality: A Review of Ruins of the North

Let’s get the obvious out of the way: Ruins of the North, the latest supplement for Cubicle 7’s outstanding Lord of the Rings RPG The One Ring, has all the polish and grandeur of every other product in the line. If you’re a fan of this roleplaying game (and really, you should be), then picking up Ruins of the North should be a no-brainer. 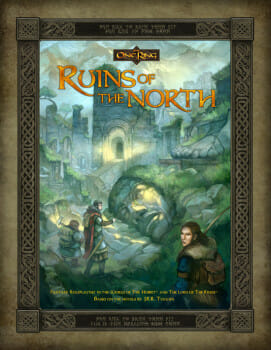 Now, to go into more detail: Ruins of the North is a collection of five full-length adventures for The One Ring that all take place in Eastern Eriador, where most of the Fellowship of the Ring took place. Specifically, the adventures tend to revolve around Rivendell, home of Elrond Half-elven. If you’re a fan of The One Ring (and, again, really, you should be), this setup may all sound familiar. And that’s because it is: Cubicle 7 gave Wilderland the same treatment with Tales From Wilderland.

Aside from the obvious difference in setting, the two adventure books are extremely similar. Like Tales, Ruins of the North’s five adventures are standalone, but can be linked into a longer campaign. Like Tales, Ruins’ adventures are of escalating challenge, with the first adventure, “Nightmares of Angmar,” most-suitable for novice adventurers and the last, “Shadows Over Tyrn Gorthad” an epic adventure that has the players fighting alongside Gandalf the Grey himself. It should be noted, however, that Ruins is not entirely as suited to beginning adventurers as Tales is, although a determined group could easily make it work. Finally, Ruins, like Tales before it, basically requires the Eastern Eriador sourcebook Rivendell to be useful (Tales From Wilderland requires the Wilderland sourcebook Heart of the Wild). It’s not entirely necessary; a true Tolkien scholar or a resourceful GM could probably wing it, but the new rules introduced in Rivendell are utilized frequently enough throughout the book that not having Rivendell is impractical.

The strengths of Ruins of the North are the strengths of every other product for The One Ring thus far. The writing style is polished and highly readable, the art is so good it can stir emotions as well as inspire the narrative, and the adventures themselves are thoughtfully done, flexible enough to accomodate a range of GMs and their respective styles but still structured enough to give a gaming group an undeniably Tolkienesque experience. If J.R.R. Tolkien had written Middle Earth as a roleplaying game instead of a series of novels, The One Ring would have been the game he created. As I said in the review for the corebook, never has a roleplaying game so completely and thouroughly married mechanics to theme as The One Ring, and every product in the line drives this point home. Ruins of the North is no exception.

Ruins of the North also carries out the looming threat first seen in the corebook: Cubicle 7 is just getting started. There will be numerous The One Ring supplements in the future, and it will most-assuredly tap the bank accounts of any dedicated fan. Even more troubling, the supplements seem to stack: Ruins of the North calls out to Rivendell , which calls out to Heart of the Wild, which calls out to The Darkening of Mirkwood, which in turn harkens to Tales From Wilderland. Combined with the corebook, dice, and Loremaster’s Screen, that’s well north of $100 in books, and we haven’t even gone south of Lorien yet. At this point, the idea of playing this game with only the corebook seems virtually absurd.

Thrifty grognards will definitely not be happy with that news, but the silver lining, of course, is that all of these books are absolutely brilliant and, if you’re a fan of The One Ring (and, really, seriously, you should be), the stunning art and high-quality writing is worth every cent. Ruins of the North is merely the latest example.

Note: My copy of Cubicle 7’s The One Ring: Ruins of the North was provided for review.

True Quality: A Review of Ruins of the North

Mobile Google’s Ingress April Fools joke – Pa…
💰 Copper Coins 💰 Geek Native is an affiliate and may earn commission on purchases you make from third-party sites.
🍪 Privacy & Cookies 🍪 The site uses cookies to survive. By accessing the site, you agree to use your browser to control cookie use or take 1d4-3 privacy damage (tracking). If you defeat cookies via ad blocking, please consider the Patreon. An intro to cookies, and how to control them, can be found here. I Manage Cookies