You are here: Home / Games / Console / A War of Words: Quarrel Review

If you have ever enjoyed either Risk or Scrabble, and you own an Xbox 360, this is for you. Denki’s Quarrel has finally completed its epic journey and is at last available on Xbox Live Arcade.

At it’s most basic Quarrel is a fusion of Risk and Scrabble. Two to four player compete to win all the territories of a small map by shuffling around their armies and defeating their opponents in battle. So far so Risky, but it is at the battle stage that the word play twist comes in. Each player is presented with the same set of eight letters, the winner is the player who can make the highest scoring word with those letters.

It is exactly the sort of crazy mix that works wonders in video games and any suspension of disbelief is rendered completely irrelevant when the winning armies pick up the letters of the better word and joyously lob them at the losing side.

So you exercise your strategic brain with concerns of offence and defence, moving your armies around and exploiting you opponents weak spots. Any conflict can have up to eight armies to a side which ties directly into the anagram section as the number of armies you have in the fight is the maximum length of word you can spell. Likewise, doing well with finding the best words feeds back into the tactics as you gain points for reinforcements or capture your opponent’s armies and add them to your own ranks. It’s a great system that really rewards you when you do well.

In addition to playing so well Quarrel is also perfectly presented. Triumphant fanfares accompany every screen, the maps are bright and clear and so welcoming they are almost cozy. The armies are represented by the happiest little pawns you will ever see, dressed up like Valkyries or robots or ninjas or other warrior stereotypes. Smaller touches shine through too like the way lower scoring words are announced with a despondent “meh,” while an eight letter 19-pointer blasts onto the screen in a massive spiky speech bubble.

Multiplayer works perfectly well over Live. My only complaint in this area is that everyone on there seems to be better than me. I guess though that just means if you start playing online you can come and beat me too. When offline the game’s AI opponents offer an impressive variety of play styles and challenges and there is a healthy selection of different play modes. It is a shame that there isn’t a local multiplayer option, although Quarrel does have the almost unique distinction of being a video game where one or two back-seat gamers can help out a lot.

Quarrel is an awful lot of fun and a nice change of pace for the Xbox Arcade. It is cheap too at just 400MSP (£3.40ish). It is really more of a word game than a strategy game; good tactics help, the ability to find words in a jumble of letters though is essential if you want to do well. Thinking about it though, there were plenty of strategy games available, there wasn’t nearly enough happy word games to play.

A War of Words: Quarrel Review 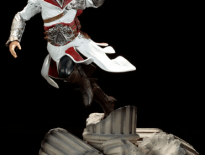