You are here: Home / Games / Fluxx In SPAAAACE!

Just now the aim of the game is to find a Monolith full of stars, only when you finally play the Monolith card (which you stole from the future) alongside your Stars one of your opponents reminds you that your Time Traveller is currently suffering from Brain Parasites preventing you from winning. By the time your turn comes back around the rules and the Goal will have changed but maybe then you will have found a way to steal Evil from the Expendable Crewman across the table allowing you to win with your Evil Brain Parasites card instead.

The game is Star Fluxx, the latest evolution of the Fluxx card game from Looney Labs. It may sound messy, but it’s an awful lot of fun.When I was first introduced to Fluxx it seemed like a nice idea; a card game where the cards themselves changed the rules of the game. The basic rules at the start tell you to Draw 1 card and Play 1 card but before long these rules will change and there will be a Goal card to tell everyone how to win. Classic Fluxx is generic game, without a theme as such and it felt to me a little like theoretical maths: there was clearly something clever going on but it needed to be application to make it worth the effort.

It seems that Mr Andrew Looney was thinking along similar lines, as soon enough Fluxx was available in Eco, Stoner, Monty Python and Family flavours. Best of all, the game got a little better with every new release. When I heard that Star Fluxx was the newest evolution I had to check it out.

Suffice to say I wasn’t disappointed. The set features caricatures of anything you could think of from classic space opera. Robbie the Robot, a Star Destroyer, the Hitchhiker’s Guide and Tribbles all feature. There are even cards called, “It’s a Trap!” and “Forty-Two”. There’s a cute Firefly character in the deck too… So the cards are fun enough on their own but when you start to play they come alive. Where else could you stop your friend from winning by making their Imperial Star Destroyer Malfunction? And repeatedly sacrificing your Expendable Crewman never gets old.

Clearly this evolution of Fluxx is still very chaotic and quick thinking and luck are more important than tactics and planning. More than the earlier games though, you do need to pay attention if you want to win. Creeper cards like Malfunction or Brain Parasites attach themselves onto your Keepers preventing you from winning while they are there. Finding a way to deal with them, or even to use them to your advantage adds a welcome layer of depth to the fun. Surprise cards also help, giving players a way to react to their opponents.

Light-hearted and simple yet baffling and complex Star Fluxx is a great way to fill some spare time with friends and family. It works as well as a two player game as it does with five players and the fact that new players can jump in at any point helps keep it friendly. It can be played while drunk at parties and it is easy enough to teach kids to play (although in both cases you might want to remove a few of the more complicated cards first). It might not have the depth to keep you up at night plotting your chance to have a rematch but you will be back for more all the same.

Disclaimer: A copy of Star Fluxx was provided by Looney Labs for this review. 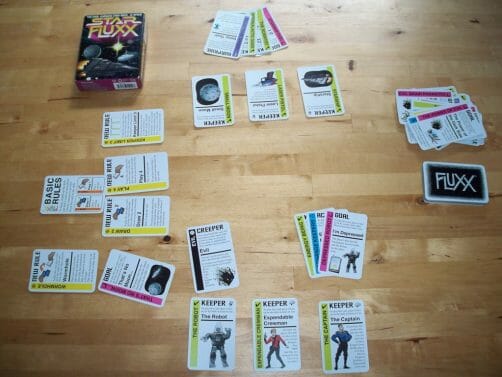 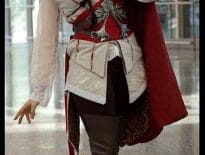