When I was a boy countless books, films and television shows depicted the 21st century as being full of technological innovations such as flying cars and robot servants. So far these haven’t come to pass (to any significant degree anyway) but that’s not to say technology hasn’t been advancing in the right direction. Computers have become commonplace and more and more we see access to information and vital services being made available online, sometimes exclusively so. Being able to get online, even for something as basic as email, is fast becoming a right, not a privilege, so when a budget smartphone comes along that offers a greater level of access for a reduced level of cost, consider me interested. Robot servants may still be some way off but thanks to Samsung’s Galaxy Ace you could soon have a little Android in your life… 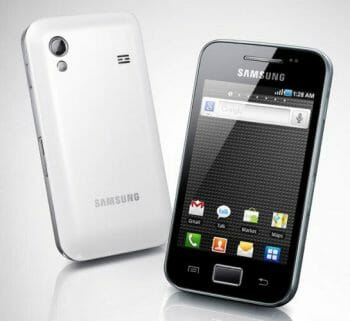 If anybody ever tells you that first impressions are what really count, shove a Samsung Galaxy Ace in their hand and over the course of a week sit back and watch them eat their words. At 113 g the Galaxy Ace is surprisingly light for a smartphone (this is largely due to a construction that’s more plastic than metal) and with dimensions of 112.4 x 59.9 x 11.5 mm it sits easily and comfortably in the hand. Whether they admit it or not, the designers at Samsung have clearly taken a certain amount of aesthetic influence from Apple as a quick glance at the front of the device and it might easily be mistaken for an iPhone. There, it has to be said, are where such comparisons end as the Galaxy Ace sits right down at the budget end of the smartphone market and with so much competition around one can’t help but draw conclusions that the Galaxy Ace has an uphill struggle ahead of it to compete for consumer attention. Don’t feel too sorry for it though as, drawing a parallel with an old children’s story, you might just begin to believe that you can hear this phone saying to itself, “I think I can, I think I can, I think I can”.

The top edge of this phone is home to a 3.5 mm headphone jack and the microUSB charge/sync port (like some of its higher-end cousins the latter port is concealed under a sliding cover to preventing pocket detritus from getting in and clogging it up – a small but thoughtful touch that I’ve praised Samsung for previously). The left hand edge houses the volume rocker switch and the right hand edge houses both the power/screen-lock button and the MicroSD port concealed under a small plastic flap (a 2 GB card is included but this can be expanded up to 32 GB – an essential move as the phone only has 158 MB of internal storage). The bottom edge is home to the microphone and a small recess that you can use to lever off the plastic backplate (the model that I tested has a smooth white plastic backplate although I believe a textured and slightly rubberised version is also available). Despite its budget status the phone is rather well put together and although the backplate is made of a very cheap plastic, when it’s snapped in place on the phone the internal design is such that it supports it adequately and there is no room for it to flex or warp giving it a surprisingly solid feel.

On the back is a 5 MP autofocus camera with LED flash and a small speaker outlet. While the results of stills taken with the camera it aren’t amazing by any means (in my testing colours tended to be somewhat understated) it’s still better than one might expect from a phone with a ‘budget’ label. There are a number of ‘scene’ modes that are of debatable use but, interestingly, you do have the option of manually setting the exposure level, which in itself is of more use than the various pre-set modes, and I was impressed by the level of detail present in macro shots. Sadly it’s the moving picture side of the camera that really lets it down and with QVGA video output at 15 fps the results are fairly poor.

Like many modern smartphones without a physical keyboard the front of the device is mostly taken up by the 3.5 mm, 320 x 240 capacitive TFT screen nestled under a sheet of Gorilla Glass. It clearly can’t hope to compete with the fancy AMOLED or SLCD screens of its more expensive kin but let’s not get snobbish here, it’s still clear and legible and perfectly adequate for everyday use. Just under the screen is a physical button that will return you to the home screen from anywhere else you may be and this is flanked by a contextual menu button on the left and a back button on the right, both of which are capacitive and light up on tough.

Audio quality during calls was good and generally loud and clear. I did experience the odd minor fluctuation in quality at the upper levels but at no point did I ever lose what the other party was saying. Music playback using a decent set of headphones was also acceptable and better than I anticipated. As for watching movies, the odd low-res YouTube video is about as good as you’re going to get. I put a couple of digital films on the MicroSD card and playback was alright in sedate scenes but when fast paced action scenes started there wasn’t quite enough horsepower in the 800 HMz processor to maintain smooth playback.

One of the things that impressed me most with this phone is the battery life. The Galaxy Ace comes with a standard 1350 mAh Li-Ion battery that sits under the backplate (along with a standard size SIM card) and which provides more than enough juice to get you through the day. In fact, with light to average use I found I could easily get by without charging the device for a couple of days. Usually smartphones are power hungry monsters that devour battery charge but whether it’s down to the hardware or the software or a very well calibrated combination of the two, the Galaxy Ace seems more apt to sip power rather than quaff it.

The Galaxy Ace runs Android 2.2 (Froyo) overlaid with Samsung’s dubiously named TouchWiz 3.0 UI. It may have an awful name but TouchWiz is actually quite an unobtrusive alternative to Google’s stock Android experience. In another nod toward Apple’s influence the UI has a non-removable shortcut bar at the bottom of the screen where the icons for phone, contacts, messages and applications/home live. There doesn’t appear to be any way to alter the order of the icons on the bar, or even what icons appear, and that seems like an unnecessary restriction. As per usual with Android you can have up to seven home screens that you can embellish with a mixture of widgets, application icons and web shortcuts. While on any home screen you can pinch your fingers together to reduce them to a minimised overlay so you can quickly choose and hop between them. The Galaxy Ace may not have the fastest of processors driving it but I never once encountered a single slowdown or stutter when navigating the various screens.

There are all the standard organisational applications you might need as well as a few less essential but useful additions like an FM radio app but you’ll very quickly want to visit to the Android Marketplace to download all your most used and best loved applications. Samsung have even bundled in a task manager to keep all your open applications in check and it’s a move I’m sure a lot of users will appreciate. Yes, I know Android is supposed to be able to manage its own resources perfectly well without any user intervention but there are mixed reactions as to just how well it does so. It’s a personal thing I’m sure but I prefer to have a much tighter level of control over what is running in the background for the sake of battery life if not overall performance.

The TouchWiz soft keyboard is much better than the stock Android one (that goes without saying) and I even found it to be more usable and accurate than the one that HTC put on their Android phones as part of their Sense UI. Even when used in portrait mode key presses were quickly and accurately registered and input was so good that I never needed to rely on the Swype option that comes with this phone. Swype is a form of predictive text input whereby you press your finger on the first letter of a word and then, keeping it pressed down, drag it through all the other letters of the word until you stop on the last letter then lift your finger. It’s generally quite accurate and where it doesn’t get the word right away, one of the alternative guesses it lists is almost certainly what you’ll be after. I’m so used to touchscreens now that I can get up quite a head of steam when thumb typing and I can give Swype a run for its money but for those who aren’t quite so adept Swype remains an enticing proposition.

There are some truly amazing smartphones on the market right now. Powerful, fast and sleek, full of the latest and greatest features all packed into a shell constructed out of hardwearing premium materials. The Samsung Galaxy Ace is not one of these but then at no point does it ever actually claim to be. It is what it is, a budget smartphone, and as such has an honesty about it that is quite refreshing in an industry that is becoming increasingly reliant on expensive and flashy gimmicks to sell devices. It performs most of the functions that one wants or needs from a smartphone and for what it is it does what it does very well. With that in mind I have no hesitation is saying that the Samsung Galaxy Ace is an excellent choice for those who either can’t afford or simply don’t want all the bells and whistles of a high-end smartphone and the high-end cost that comes with it. It represents fantastic value for money and will, I have no doubt, attract a lot of attention from consumers. Going back to that parallel with a certain children’s story that I raised earlier, you can almost hear it saying now, “I knew I could, I knew I could, I knew I could”.

I score the Samsung Galaxy Ace a GeekNative score of 8 out of 10.

Review handset provided courtesy of 3 Mobile who have recently led the way in opening up online access for everyone by offering all-you-can-eat data plans for Pay as You Go customers for just £15.

Neither this site, nor the author of this article, is affiliated to, endorsed or sponsored by any of the parties therein.

Geek Stuff Dr Who: Day of the Moon done in Lego