The Trigun movie enjoyed its UK premiere as part of Scotland Loves Anime. Glasgow got the scoop and this week the feature-length anime made it to Edinburgh.

Directed by Satoshi Nishimura, screenplay by Yasuko Kobayashi and storyboarding by Hideki Inoue, Soichi Masui and Satoshi Nishimura the movie has all the Trigun experience it has to do the series justice. In fact, the movie comes out some ten years after the series stopped running and in many ways displays an animation quality that exceeds the series.

As it happens, the series and movie producer Shigeru Kitayama and director Satoshi Nishimura made it to Glasgow for the premier. The blog Chaos Tangent has a write-up of the event, including some pictures and is worth a look.

I can only imagine the director and producer would have been happy with the crowd’s reaction in Edinburgh. We laughed at the jokes. We were delighted by the action. If there were any humbugs of differing opinion (there’s always some) then I didn’t see them. The film certainly made me laugh and the action sequences held my attention.

The plot is pretty simple – but that’s alright. This was a send-off movie. There’s no need to over-complicate things. There’s also a time-jump right at the start of the movie and this seems appropriate given the gap in time between the series and the movie. Twenty years ago, Vash interrupts a robbery and makes sure no one is killed. It was a robbery gone wrong, leaving the gang’s fearsome leader Gasback out for revenge.

Twenty years later, the action picks up in Macca City. Rumours are rife that Gasback is coming to down to steal to a wholly awful and terribly large bronze statue that’s insured for a whopping $$5bn.

The major of Macca has a cunning plan, though, as he hires a whole load of robbers, bandits and mercenaries to try and stop Gasback. By the team our heroes arrive the place is teaming with low life scum. The name “Badlands Rumble” is well picked.

It’s clear to me that Trigun: Badlands Rumble is one of those movies that explodes into life on the big screen. All the explosions in it certainly help. The landscape seems bigger. The action seems more intense. The movie seems epic. I’m pretty sure a big TV screen would be good enough, even if it’s not the same.

I enjoyed Trigun: Badlands Rumble. I don’t have the series on DVD. After watching this movie, I might just go out and try and buy it.

loved this, looking forward to getting the tv series on dvd 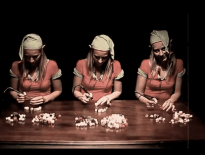