So last time, I talked about how to run a game with a small scale, focused mainly on stakes that focus on the plight of one person or a small area in need.

Now I’d like to crank the dial the other way and up the scale to the nation and world-changing campaign. Focus on giving your campaign a sense of depth and scale. How do you make a world and story feel massive?

I have to start with the hard news. If you want to run a game where the players change the world, you have to let them change the world. They should be allowed to topple nations, reshape continents and even mess with the timeline. Don’t let it run to your schedule. They got massive powers and abilities and contacts; then you don’t need to dictate anything – just give them problems to solve and watch as they use everything at their disposal to achieve that, then think of the consequences. Time to let go of a planned adventure in that way.

In a wider-stakes game, it’s time to let the consequences be shown on a high-scale.

We aren’t fighting to save one person but stop cities from falling. The locations should be many and different, with players maybe visiting several epic and different locations in every story arc, perhaps sometimes in the same session.

In a recent high-level D&D game, in the space of three sessions, my players consulted with allies in person on three different continents and then undertook missions to both the Shadowfell and Feywild in order to manage different parts of a plan.

You’re going to have to be ready for a game that moves around a lot and has a cast of hundreds. You know all those notes you took in the previous games? Get familiar with them.

You also need to show that the actions are vast and make sweeping changes. If the players mess up at this stage in the game, killing off an entire battalion of NPCs, some of whom were loved by the players, is ok. It’s not a technique I recommend using all the time, but absolutely flattening a location or faction is a real gut punch. Losing one NPC can hurt but leaving a faction-sized hole in the game feels way bigger.

At the same time, the players need to be able to bring hope to many and see in the reactions they are a big deal. Have people actively thank them for making their lives and lands better. Have a powerful monster choose to aid the players – out of fear and respect. This tells the players that it’s a big deal, and they are starting to make names for themselves equal to their deeds.

You’re going to have to be ready for actions and events that have to be mechanically represented on a vast scale. And unless you have system that does that, you need to pre-decide how mechanical you want that to be.

Are you interested in each person in a group of a hundred having stats and being savable? Or do you want the fates of nations and others to be narratively linked to heroes?

An example of a way to do this in D&D is to set up a massive decisive combat action, and every time a hero gets knocked to 0 hit points, another part of the larger objective is lost.

I’ve done this for siege actions – the heroes’ fate is tied to the cities, and while the players halted the onslaught, some core NPCs who provided services in the town were not standing by the end, even though they were far away from the players.

It is possible to work in backstory and personal elements into a large-scale game but try to turn everything up to eleven. The PC’s evil uncle isn’t just a dark sorcerer, he also has a whole regiment of undead warriors. And the conclusion of them coming into conflict can be explosive and earth-shattering. This also works for recurring villains, whose schemes should become increasingly threatening and increasingly desperate as they are beaten by the heroes.

Foreshadowing takes a different bent with a bigger-scale game. It’s not about hinting at things to come; it’s about counting down to disaster – you have seven days to stop the ritual, the enemy army will be here in two weeks, and you have to be ready. Just over the hill is a dark, titanic threat that will smash everything the players care for to pieces. Keep them on clocks and then give them too much to do and watch as they think up more and more intelligent solutions.

The narrative should be about the big picture and allow some disparate story threads to be completely apart. Yes, you need to be presenting a world that moves and changes because of what’s going on but also create smaller episodic moments that don’t relate to each other – You want the help of the dwarves who live miles away but they don’t care, it’s too far away and they have their own problems. But if you fix a thing for them, they’ll maybe help you out and tie themselves in to the larger threat.

Different moments, stories, councils and locations should feel different to each other. Doing so makes the world feel more lived in and geographically far apart. Then players can contact all of them and use them as a resource makes for a bigger playing field.

A large-scale campaign should always be moving towards..something. It lives off big threats and you should be making sure that occasionally things conclude in a satisfying way so the players can feel like it’s safe to take a moment to breathe.

Remember, it’s possible to completely pull the rug out from under your players’ feet by judge-upping the scale quickly.

The players think they are investigating a small conspiracy, and then you blow up a building or a house. They think they are in a city to seek help against one dragon when seven fly in and raise the whole place to the ground. This can create impressive moments of survival against all odds, and I always suggest doing something like this just before a system suggest players can handle it. It’s a signal that a new level of conflict has arrived, and the players had better not have gotten complacent.

Either way, that’s it for large-scale games, I hope you enjoyed this guidance, and it helps you run games that are real blockbusters. I hesitate to say what I am working on for the next article as I have been handed a request to write an article by a group of DMs I know, so we’ll see how that goes! 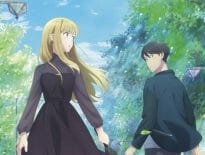 Anime A Galaxy Next Door and an out-of-this-world wife?… 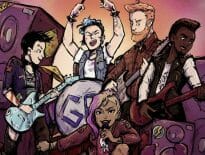 Tabletop & RPGs Gutterpunk: The RPG that pitches magic, music and …
wpDiscuzComment Author Info
Manage Cookie Consent
This site uses cookies 🍪, and links are ads that may earn bloggers some money 💰, and with this alert, I very much hope that these dark truths 🧌 are acknowledged.
Manage options Manage services Manage vendors Read more about these purposes
Preferences
{title} {title} {title}
Loading Comments...