There’s a new free adventure for D&D from Wizards of the Coast. In Scarlet Flames is available from the publisher’s Magic The Gathering site.

The 14-page download is part of the Magic The Gathering and D&D crossover and suits four to six characters of the 8th level.

Two Red Wizards of Thay have undertaken a secret mission into the High Moors east of the Sword Coast. They are searching for something or someone. Whatever their goal out there in the cold and windswept hills, if the Red Wizards want to keep it secret then it is probably best uncovered swiftly for the good of everyone else. Even the mercenaries who escorted them into the wilderness earlier agree: someone should stop them.

In Scarlet Flames is part of a wider free adventures program from Wizards of the Coast for the Forgotten Realms event. Stores, especially in the USA, will also get free physical handouts to give to some customers.

Wizards have said their goal is to get D&D players interested in Magic and Magic players interested in the tabletop roleplaying experience. With that in mind, an adventure for up to 6, needing at least 4 players and with level 8 characters is brave. Perhaps Wizards assume that MtG players have tried introductory encounters already and found them lacking.

Free to Download official D&D: Adventures in the Forgotten Realms 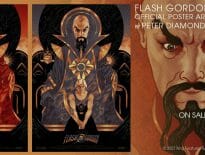