You are here: Home / Games / Tabletop & RPGs / Apocalypse 2.0: A Review of Legacy: Life Among the Ruins

The latest game powered by the Apocalypse, Legacy: Life Among the Ruins serves as an elegant re-exploration of the trail first blazed by Vincent Baker in his revolutionary 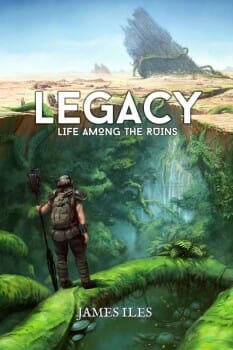 Legacy is, essentially, a prettier, cleaner, and more-refined version of Baker’s game. Legacy is classic post-apocalypse adventure, complete with mutant monsters, weird and wild technology, and even a Maelstrom to get sucked into or have beasts spew out of! Legacy’s one spin on the formula is in its title. While Apocalypse World more or less revolved soley around the PCs, Legacy features not only characters, but whole entire families (in the tribal, community sense) run by the players. These families have their own moves and stats, needs and motivations. Play is designed to span several generations, with the players making new characters who carry on the family name. Legacy’s family system seems solid and well-done, adding a deep and detailed twist to the material we’ve come to expect from a “Powered by the Apocalypse” game.

The families are divided into five special “family” playbooks with their own stats and moves. Combined with the eight playbooks, there is a surprising amount of depth to be found in Legacy’s slim 124-page count. Those wondering if Legacy’s playbooks add anything to the entire Apocalypse brand will probably be disappointed; though the family playbooks are interesting, the character playbooks broadly represent the various tropes of post-apocalyptic fiction. They are well-done and seemingly balanced, but not particularly inspired.

Of special note in Legacy is its production value. The bar keeps getting raised for indie production, and Legacy is arguably the prettiest game the Apocalypse has produced. The art is evocative, colorful and inspiring. Combined with the clean formatting, Legacy has a look and feel all its own, despite traveling over virtually the same turf as Apocalypse World. While the latter game has a gritty feel, inspired by the Mad Max movies, Legacy’s cleaner look feels more like a classic science-fiction novel, like something Ursula LeGuin might have written. Whether this shift in theme justifies an entirely new RPG is debatable, but any gamers who were turned off by the “rough around the edges” feel of Apocalypse World should definitely take a close look at Legacy.

Legacy: Life Among the Ruins treads over a path well-worn by Apocalypse World, and as a result may become one of the Apocalypse Engine’s more forgettable titles, in the long-term. However, its sharp presentation and refinements to the Apocalypse formula make it a quality title. Fans of Apocalypse-powered games should definitely add this one to their collection, as well as any gamer looking to expand their library of post-apocalyptic RPGs.

Apocalypse 2.0: A Review of Legacy: Life Among the Ruins

Cool Tech Made real: The gun from Psycho-Pass stuns
💰 Copper Coins 💰 Geek Native is an affiliate and may earn commission on purchases you make from third-party sites.
🍪 Privacy & Cookies 🍪 The site uses cookies to survive. By accessing the site, you agree to use your browser to control cookie use or take 1d4-3 privacy damage (tracking). If you defeat cookies via ad blocking, please consider the Patreon. An intro to cookies, and how to control them, can be found here. I Manage Cookies