You are here: Home / Books / Druids and helicopters: A review of SEAL Team 666 – Reign of Evil 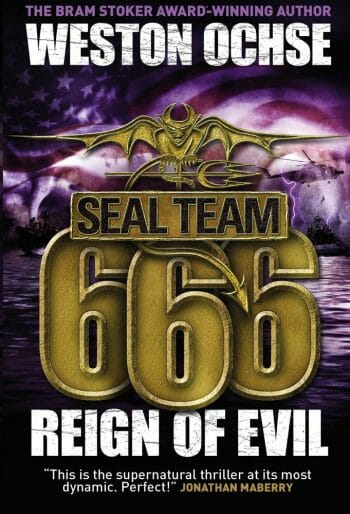 Reign of Evil is the third in the SEAL Team 666 series and follows on Age of Blood. It starts off with the death of one of the key characters from the previous two books. You’ll be wondering whether this is a comic book bluff death or the real thing for a while.

In Reign of Blood the Seals of Triple 666 find themselves in England, on Christmas, just as a prophecy about King Arthur returning to rescue the land kicks on. There’s a catch; the prophecy is dangerously wrong.

This is another solid offering from Weston Ochse. I liked the first two. I liked Reign of Blood as well. We know the characters now. We can start to predict how they’ll react. We’ve a good measure of their talents so we know just how much trouble they’re in when the brown stuff splatters off the fan.

I suspect Weston Ochse took a holiday to the UK, watched the news, saw the rise of UKIP and penned a horror about the return of an ancient evil.

It’s an interesting thing being a Scottish person reading Reign of Evil at Christmas. The book confuses England with Britain. Of course, this may actually be the American characters confusing England with Britain, it might be the supernatural powers making a distinction or it may just be that Ochse followed the Scottish independence referendum and concluded the UK would be in historic parts soon enough.

The other catch is the state of the anti-supernatural squad in the UK. Whereas SEAL Team 666 are maxed out with all the best kit the British equivalent is a rundown sorry state of affairs. There is a plot reason for this but it is the expected juxtaposition. Thankfully we’re saved from the nearly-as-common scenario where the Brits are tea drinking idiots and it takes some American muscle to sort the situation out.

The result is I rather enjoyed the arrival of the American warriors. I knew the locations they found themselves in during their grand tour of the south and I suspect most Brits reading the book would too. It’s harder to imagine what American readers would make of Triple 666 dashing from castle, to burial mound and so forth. The truth is there really are no shortage of such sites in the UK. The world Weston Ochse has created is a world in which the United Kingdom would be a fiercely supernatural and therefore dangerous place.

I think it’s pretty straight forward. If you enjoyed the first two SEAL Team 666 books then Reign of Evil won’t disappoint. It’s a little different in terms of tempo and perhaps with a touch less focus on the military hardware but it feels like the natural next step.

As an aside; I finished reading this book on a flight from the London City Airport back to Scotland. The actual Lord Robinson (Baron Robertson of Port Ellen, ex-Secretary General of NATO) was on my flight as were a few other politicians.

Druids and helicopters: A review of SEAL Team 666 – Reign of Evil

Geek Stuff Rule 63 4th Doctor
wpDiscuz
💰 Copper Coins 💰 Geek Native is an affiliate and may earn commission on purchases you make from third-party sites.
🍪 Privacy & Cookies 🍪 The site uses cookies to survive. By accessing the site, you agree to use your browser to control cookie use or take 1d4-3 privacy damage (tracking). If you defeat cookies via ad blocking, please consider the Patreon. An intro to cookies, and how to control them, can be found here. I Manage Cookies