You are here: Home / Books / Comics / A review of Sharky: The boy demi-god 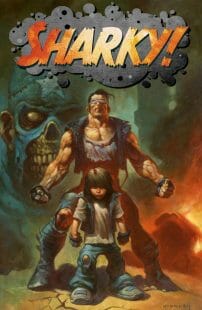 Written by Dave Elliott and with art from Alex Horley there is utter madness with the graphic novel Sharky.

Sharky is a teenage boy who can transform into the demi-god Sharky. Yes, at one point he shouts “Shazam” to try and engage the transformation. He can’t actually control it; it’s hormonal.

The Shazam reference is hardly significant. At one point four school kids are attacked by a hulked out monster and the one in the pulled closed orange hoodie dies, “Oh my god! They killed Kenny!” says one, “You bastards!” says the other.

There’s a flaming carrot of a superhero. There’s a lady vampire in a tiny bikini. There’s the Mask. There’s the famous Fantastic Four cover homage. There’s a Captain American figure. Sharky doesn’t smuggle in pop comic culture references; Sharky is built from comic culture and the graphic novel is laden with them.

This video tour highlights just a little of the 144-paged hardback graphic novel from Titan Books.

Sharky is the grandson of Odin and Zeus. In this chaotic clash of comic book culture we have two pantheons going head to head. Thor is a woman.

Given Thor’s skimpy costume and Vamperilla making a typically extroverted appearance it might be tempting to ascribe some fan service to Sharky. Rightly so, perhaps, but I found some interesting notes from Dave Elliott in the “The Secret Origins Of… Sharky” section at the back.

I’d always planned on Sharky being the offspring of both Greek and Norse gods, so there was a reason to bring the various pantheons into play. I also wanted to play off the fact that most myths, legends and religions were sexist, written and controlled by men. What if Thor was female? What if Freya hid her from Odin and tricked into giving this girl the power of the elements, and control of the hammer Mjolnir?

Sharky isn’t a fascinating study of mythology, though. Sharky is a mash up – a mosh up – of comic culture. It’s wild and often random. It’s the result of several different creative treatments. It’s a graphic novel that you can either switch off, flick through the pages and grin at or switch on, concentrate hard and keep up with. It doesn’t really do the middle ground between the those two options.

A review of Sharky: The boy demi-god 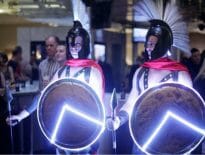 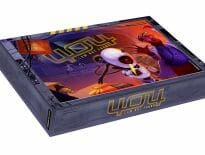 Sites 404: Law Not Found – 3DTotal take robot madn…
💰 Copper Coins 💰 Geek Native is an affiliate and may earn commission on purchases you make from third-party sites.
🍪 Privacy & Cookies 🍪 The site uses cookies to survive. By accessing the site, you agree to use your browser to control cookie use or take 1d4-3 privacy damage (tracking). If you defeat cookies via ad blocking, please consider the Patreon. An intro to cookies, and how to control them, can be found here. I Manage Cookies