You are here: Home / TV / Online Shows / Warcraft webseries: The Burdens of Shaohao

Blizzard have put together a wonderfully animated webseries called The Burdens of Shaohao. It is a story from the games’ past, a warning of The Great Sundering and features the last Emperor of the Pandaren has he tries to save his people from destruction.

These days they call this content marketing. This is a great example of it working as I’ve never been more interested in the MMORPG World of Warcraft than I am today.

Warcraft webseries: The Burdens of Shaohao 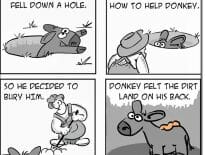