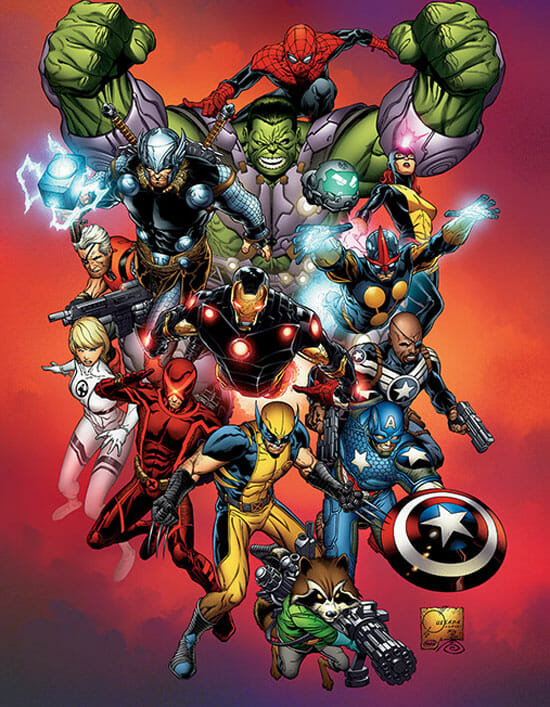 It’s been a year since the New 52, this week DC announced the New 52 Zero Collection and today Batman: Earth One comes out.

Marvel’s had success with the movies and they’re clearly determined to make progress in the core comicbook marketplace too. We’ve had teasers for Marvel’s This Is War but Marvel’s NOW appears to be something new.

Marvel NOW has a new title come out pretty much every week from October up to February 2013. That’s many weeks of new comics.

We don’t yet now what all these comic titles will be but we do know about three of the them. They are;

The return of Jean Grey!

The original, teenage, X-Men – that’s Cyclops, Beast, Angel, Ice Man and Jean Grey- are send from their present day to their future in order to face their adult selves. This is a story from Brian Michael Bendis who notes;

“Here’s the big question that the original X-Men are gonna be faced with: We’re gonna grow up, and this is what we’re going to get? That is not acceptable.”

The Avengers will be big – in both senses of the word. The new Avengers team, put together by writer Jonathan Hickman and drawn by Jerome Opena, will feature 18 heroes. They’ll face big space threats.

I think of the Avengers movie whe I think about this. The movie ended with big space threats and a big pool of 18 heroes gives the movie makers plenty to churn through. It also feels like a logical use of a team as significant as the Avengers. Anything smaller than this feels like a waste.

What happens when Marvel is through with Avengers vs X-Men?

A new beginning? A new team! This new team will be composed of both X-Men and Avengers. Writer Rick Remender will give the villains of the series the same treatment. He notes;

“I’m not just smashing the heroes together, I’m smashing the villains together. It becomes something unlike anything we’ve ever seen, with stakes that are so huge, it takes a team comprised of the best Avengers and the best X-Men to go take care of it.”

What do you think? Is this a strong pitch from Marvel? Will you be a buyer?

This superhero-themed post is from 2012’s Superhero Week. Made any good superhero discoveries online recently? Share them in the comments below.

Movies Superhero Week: Iron Man 3 concept art – Ext…
💰 Copper Coins 💰 Geek Native is an affiliate and may earn commission on purchases you make from third-party sites.
🍪 Privacy & Cookies 🍪 The site uses cookies to survive. By accessing the site, you agree to use your browser to control cookie use or take 1d4-3 privacy damage (tracking). If you defeat cookies via ad blocking, please consider the Patreon. An intro to cookies, and how to control them, can be found here. I Manage Cookies